More than four square kilometres of temporary play space was created in an instant last month as Londoners came out to play on their car free streets. 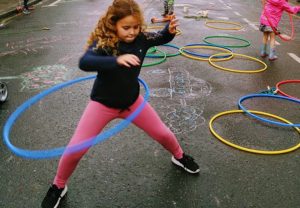 Car Free Day on 22 September saw some 385 residential streets open for play across 26 London boroughs, nearly doubling the target of 200 and demonstrating residents’ real appetite for exploring more creative uses of the space outside their homes. Thousands of Londoners had the chance to experience their streets car free and for some, there will be no turning back (see gallery, left).

Despite weeks of sun giving way to rainy conditions on the day, Londoners were undeterred and determined to make the most of the opportunity to reclaim their streets from cars. On many streets, food was shared; others had smoothie bikes; and one even had a solar-powered cinema. But the common thread everywhere was play. Children, delighted at the chance to occupy usually forbidden space chalked on the road, raced up and down on bikes or scooters; or played make believe with their friends next door. In doing so, they became the catalyst for their parents and carers and other adult neighbours to come together as a community for a few hours.

And what a transformation took place. On one road in Wandsworth, children who had never ridden up their own street on bicycles finally got to do so. In Redbridge, a little boy wrote his name for the first time; in chalk, on his street.

On another street, the ‘grumpiest neighbour on the road’ came out for cake and a chat.

In Enfield, where a school neighbours a care home, elderly residents joined the fun, enjoying the sights and sounds of children playing and chatting with their parents and carers over a cup of tea.

Boroughs where there is no procedure by which residents can normally apply for play streets arguably had the most delighted reactions:

“Best moment [was] when a child shouted: “I’m so happy there’s no traffic!” while cycling down the road. Made my day.” said one organiser from Kensington and Chelsea.

A Wandsworth organiser said: “We had so many nationalities: Portuguese, Norwegian, Italian, Spanish, Egyptian, Pakistani, French etc and they bought food from their countries to share with their neighbours. All the children used scooters, skateboards, bicycles, go karts etc and they didn’t go on their phones once! Brilliant idea. Neighbours asking when we can do it again.”

Many of the events were ‘one-off’ trial play streets but with over 80 per cent of respondents saying that they are interested in making play on the street a regular feature of life in their neighbourhood, there are positive signs that it will spark longer term change.

If you’ve been inspired and would like to find out how to start your own play street, please get in touch!

What does the new 'rule of six' mean for play streets?

From Monday 14 September, it will be illegal in England, unless at school or work, for someone to meet more than five other people at a time. What does this mean for play streets?
Read More

Visit our dedicated site for inspiration, information and all the resources you need to start your own play street or just find out more.
VISIT LONDON PLAY STREETS